What TV does to the developing brain 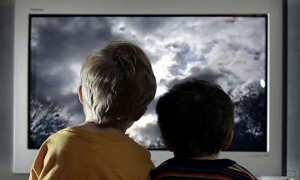 I was at a downtown festival in my city and ran into one of my middle son’s Montessori teachers. She shared that she was finishing up a really challenging year because of several “difficult” children. She stated that every year she seemed to get more children with learning and attention issues. I asked her to describe what types of issues these children have and she mentioned attention problems, issues with learning and social relationships. I asked her why she thought that children seemed to be coming to school with more problems and she said, “I think one of the reasons is that children don’t have enough downtime without computer games, movies, TV, where they can get outside and just play. Parents think they always need to be entertained”. She went on to add that when parents pick their children up from school they watch a movie in the car DVD player instead of looking out the window and talking about what they see.
I was reminded of what Joseph Chilton Pearce says in Evolution’s End, Claiming the Potential of Our Intelligence, that television, (and we can now include computer games), causes neurological damage to children. According to him, our society is not evolving, rather it is devolving and one of the main causes is TV. Television replaced storytelling and substituted for family conversations at the dinner table. In addition, television replaced parents playing with their children and decreased the amount of time siblings play. This is a great loss as play helps develop internal imaging. Television floods children with images at the very time they start to learn to create their own internal images. Therefore, they lose the ability to create their own images and therefore lack imagination.

How does this inability to create image affect learning in school? They can’t “see” what the mathematical formula, word or chemical formula means. They can only sense what is immediately bombarding their physical senses and are restless and uncomfortable without this bombardment. Being sensory deprived, they seek out more stimuli through restless activity. Joseph Chilton Pearce says that a child that cannot imagine cannot learn.
My children were brought up without television. It happened the day a storm blew over our antenna on our roof. Up until that time they were allowed to watch “Sesame Street” and “Mister Rogers”. My husband and I liked to watch the news. There was a segment about the guerrillas fighting in Afghanistan. That night and the next few nights my middle son could not go to sleep because of his fear of the “gorillas” coming to get him.  My husband and I decided to not pay for cable because of this incident and because of  the addictive power of TV for us and our children. I wanted my kids playing downstairs in the basement or outside. They spent hours playing dress up, swashbuckling sword scenes, and “Star Wars” scenes.

They put on puppet shows and plays. They were allowed to watch movies occasionally and when they got older, play some computer games. We went to the library every week and checked out 30 or 40 books. They would read them in the car all the way home from the library and then when we got home we would have cut up apples and cheese and I would read to them as we sat on the sofa, one in my lap, and one on each side of me. At that time, I was just introducing them to my love of books and did not know that I was building their imaginations, establishing neural networks, laying down the necessary building blocks of learning. 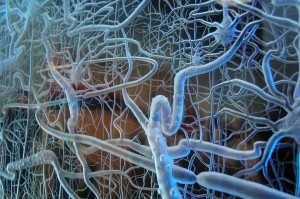 Here’s a picture of a neural network.