Magnetic Charm: How to Stand Out from the Crowd & Make People Drawn to You If you rated yourself as high on charisma, here’s the good news:

Charismatic people have a lot of benefits in life. They are seen as strong leaders, so they tend to get promoted more often. They are great at winning friends and influencing people, so they usually get their ideas adopted inside of an organization. They make more money and they have deeper relationships with people, people are naturally drawn to them.

If you rated yourself as low on charisma, well there’s good news for you too:

The good news is that charisma is an easily trainable skill.

We used to think that people are either born charismatic, or they aren’t–either you’ve got it or you don’t.

Because of new research in behavioral psychology, we now know that this way of thinking it is simply not true. People who are charismatic developed the skill of being charismatic over time.

Charisma is just a set of behaviors and an approach to the world that makes people feel drawn to you.

Olivia Fox-Cabane in her great book The Charisma Myth shares the compelling new research on charisma that’s totally changed our understanding of it. She shows that charisma is really just about two things: Power and Warmth

There’s also a third “X-factor” that is almost like a shortcut or a “proxy” for charisma, and that’s presence.

Before we get into each of these areas, though, there’s a quick disclaimer about charisma: Charisma is not really about your skills with words, it’s largely judged by other people based on your NON-VERBAL communication style in the moment.

In other words, it’s less about WHAT you say, and it’s much more about HOW you say it, what your body language is telling the other person in the moment, etc.

Anytime you have an interaction with someone, they are unconsciously observing you and coming to conclusions about you. The average person is much better at picking up on the energy and the “inner world” of the people they’re talking than we give them credit for.

Alright, let’s take a look at the first component of charisma: Power.

Fox-Cabane shares that power is people’s unconscious answer to this question: Does this person have the ability to move mountains?

Power comes in lots of different forms, like the ability to persuade others via inflence, financial power, attractiveness, an innate sense of confidence, etc. But here’s the important thing to remember: It’s people’s PERCEPTION of your power that is what counts here. It’s not the reality of how powerful you actually ARE, but it’s how other people feel about you.

That being said, you can’t just pretend to be powerful. You really have to feel powerful yourself before anyone else will agree and feel like you’re powerful, too. 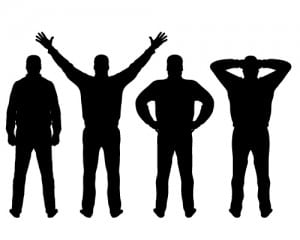 Standing in one of these “power poses” for just 2 minutes will increase your feeling of power and lower your stress levels.

Here’s a quick shortcut to finding that feeling of power: There’s some really fascinating research that Power is something that you can “Fake it ‘til you make it.”

Just standing in a power pose like the ones you see to the right for just two minutes is enough to create a feeling of inner power.

In fact, researchers had a look inside the brains of students before and after they did these poses for just two minutes and found that their hormone levels associated with power (testosterone) were significantly elevated after this experience.

They also found that they had lower “stress hormones” (cortisol) after doing these same poses. In other words, they felt both more powerful and less stressed because they stood in a power pose for just two minutes.

If you want to watch a fascinating video on human body language and its effect on our inner and outer world, check out this TED talk by researcher Amy Cuddy. http://www.ted.com/talks/amy_cuddy_your_body_language_shapes_who_you_are

Alright, let’s take a look at the second component of charisma: warmth

As Fox-Cabane shares in her book, warmth is the answer to this question: Does this person truly care about me?

People who are highly charismatic show a genuine caring for the people they come in contact with. Again, they demonstrate this caring in the non-verbal signals the send to people.

Warmth cannot be faked. People are much smarter than we give them credit for at assessing our intentions.

Have you ever had an interaction with someone who was insincere? Their words may have said something like: “I want to help you.” But in reality, you may have picked up this intention: “I want to sell you something.” 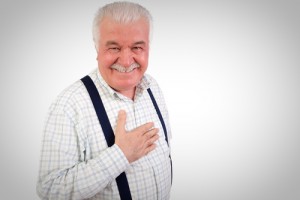 Notice how this man is smiling from both his eyes and his mouth, which is the sign of a true, authentic smile.

Remember this: Warmth cannot be faked!

People can detect insincerity from a mile away. That’s why certain political candidates are seen as “cunning” or “manipulative” or “insincere”– people are picking up on the disconnect between their words and what their tone and body language are saying.

One quick way to help people feel like you care about them is to give yourself a task to find something interesting about every new person you meet.

You can ask yourself a question like: What’s one thing that’s really interesting about this person?

Just keep looking for the answer to that question as you talk with someone. They’ll feel like you’re genuinely interested in learning more about them as a person.

Presence is the X-factor for charisma. Presence is the ability to completely sink into the moment and to be, well, present for the person in front of you.

The great masters of charisma convey this idea to the people they’re speaking with: “You’re the most important thing to me in the world right now, this interaction matters to me more than anything else, so I’m going to completely focus on it now.”

When you get out of presence, people can feel it. We’ve all had interactions with people who are thinking about their to-do list while they’re talking to you. Or they’re waiting until you finish so they can tell you about their business.  Or worse, they’re hurrying to talk to the next person at the networking event.

So if you want to be charismatic, don’t be one of those people! 🙂

Seriously, though, presence is another skill that can be developed. There’s a lot of different ways to train your brain for greater presence that we share with people in our coaching programs.

But here’s one quick tip about presence: The next time you find your mind wandering during a conversation, just bring your attention back to your breath.

The next time you find your mind wandering during a conversation, here’s a quick way to bring yourself back to the present moment: Focus on your breathing.

Just give yourself a moment to take a deep breath in and slowly exhale as you listen to the other person speak. Feel what it’s like for your chest to expand and the breath to gently leave your body.

It will immediately bring you back to the present moment and back into that charismatic state that we’re all searching for as great communicators.

Alright, to recap this post, if you want to be more charismatic, focus on developing your feelings of power, warmth, and presence.

For more tips on how to become more charismatic, I highly recommend you check out The Charisma Myth by Olivia Fox-Cabane.

Josh Matthews-Morgan is the co-founder of Learn Your Brain, a coaching and training company that shows people how to develop the mental habits and rituals for peak performance.