The Myth of Multitasking

Are the following statements true or false?

Actually, all three of these statements are wrong.

Nobody is good at multitasking. Nobody!

The human brain is physically incapable of doing two activities that require conscious attention at the same time.

Sure, you can drive your car and talk on the phone at the same time. That’s because driving for most adults is a subconscious, automatic activity–you don’t need much conscious attention to do it.

But you can’t do two or more tasks that require conscious effort at the same time!

Instead, what you’re doing when you try to “multitask” is what researchers call “task switching”–jumping from one task to the other.

Sometimes, you switch between two tasks so quickly that you feel like you’re “multitasking” and getting a lot done.

But it’s just an illusion. Sure, it may feel like you’re being really productive, but that’s just not true.

Research shows that people who are regular multitaskers actually get a lot LESS done over time. High multitaskers also make a lot more mistakes (up to 50% more) than people who monotask–focus on one thing at a time.

Here’s the real problem with multitasking:

Every time you switch between your e-mail and that report you’re writing, your brain has to reactivate the “rules” of that new activity.

There’s always a delay of time while you reorient to the new task.  If the task requires a lot of thought and mental processing, that delay lasts much longer.

For example, maybe you’re pulling data from a lot of different spreadsheets in order to complete your report.

Then you get an email notification that interrupts you. Not realizing what you’re doing to yourself, you switch your attention to the email.

Let’s say you spend a couple minutes responding to the e-mail, then you notice another e-mail you forgot to respond to.

After 15 minutes of e-mail, now you switch back to the report.

Your brain has to re-orient itself back to where you were fifteen minutes ago; it takes you another ten minutes just to recollect your thoughts and get back on track.

Actually, research shows that every time you get distracted, it takes on average 20 minutes to return to the original task.

As you can see, multitasking is a huge time suck!!

Here’s a useful metaphor that will help you understand how very limited your conscious mind really is.

Imagine that your mind is like a tiny stage. On this stage, you can only fit 3-4 actors (different thoughts) at a time.

And all of those actors can only be working on ONE scene. Meaning they are only doing ONE thing.

They can’t each be doing their own different monologue. Can you imagine the chaos of 4 people talking about something completely different at the same time?

That’s what it’s like inside your brain when you try to multitask. Utter chaos!

Multitasking actually has serious consequences for your brain. 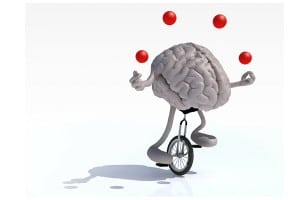 They’ve found that “high tech juggling” creates a heavy toll on your stress level and your ability to think clearly.

High multitaskers are terrible at tests of thinking ability:

Shockingly, they found that your IQ falls 10 points when you’re juggling between different tasks. 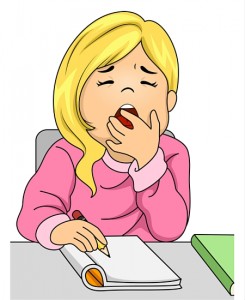 It’s the same loss in thinking as if you had missed an entire night of sleep.

This is because of “cognitive overload”–you’re doing too many things at once, and frying the circuits in your brain.

When you’re focused and in flow, you release more of a neurochemical called “noradrenaline.”

Think of this chemical as a focus booster, it helps you concentrate on what’s in front of you.

On the other hand, while you’re “multitasking”, your brain is constantly scanning for the next distraction.

If you multitask a lot, your brain actually produces less of the neurotransmitters that help you focus. Over time, it becomes harder and harder for your brain to sustain focus.

Still not convinced that multitasking is killing your productivity and your brain power?

Do a quick experiment: Take one day where you make a conscious, deliberate effort to focus on only one thing at a time until you finish it.

Then on the next day, go back to your old pattern of multitasking.

At the end of each day, notice the difference in your stress level and how productive you feel.

You’ll see that the days when you focused on just one task a time were dramatically more productive and successful. And you may have felt happier!

The bottom line: The quickest way to shoot yourself in the foot is to multitask.

Instead of being proud at your ability to “multitask”, start getting good at focusing on ONE thing at a time.

Totally immerse yourself in that one activity until you complete it. Then, switch to ONE more task and complete it.

You’ll be doing yourself, your productivity, and your brain a huge favor!